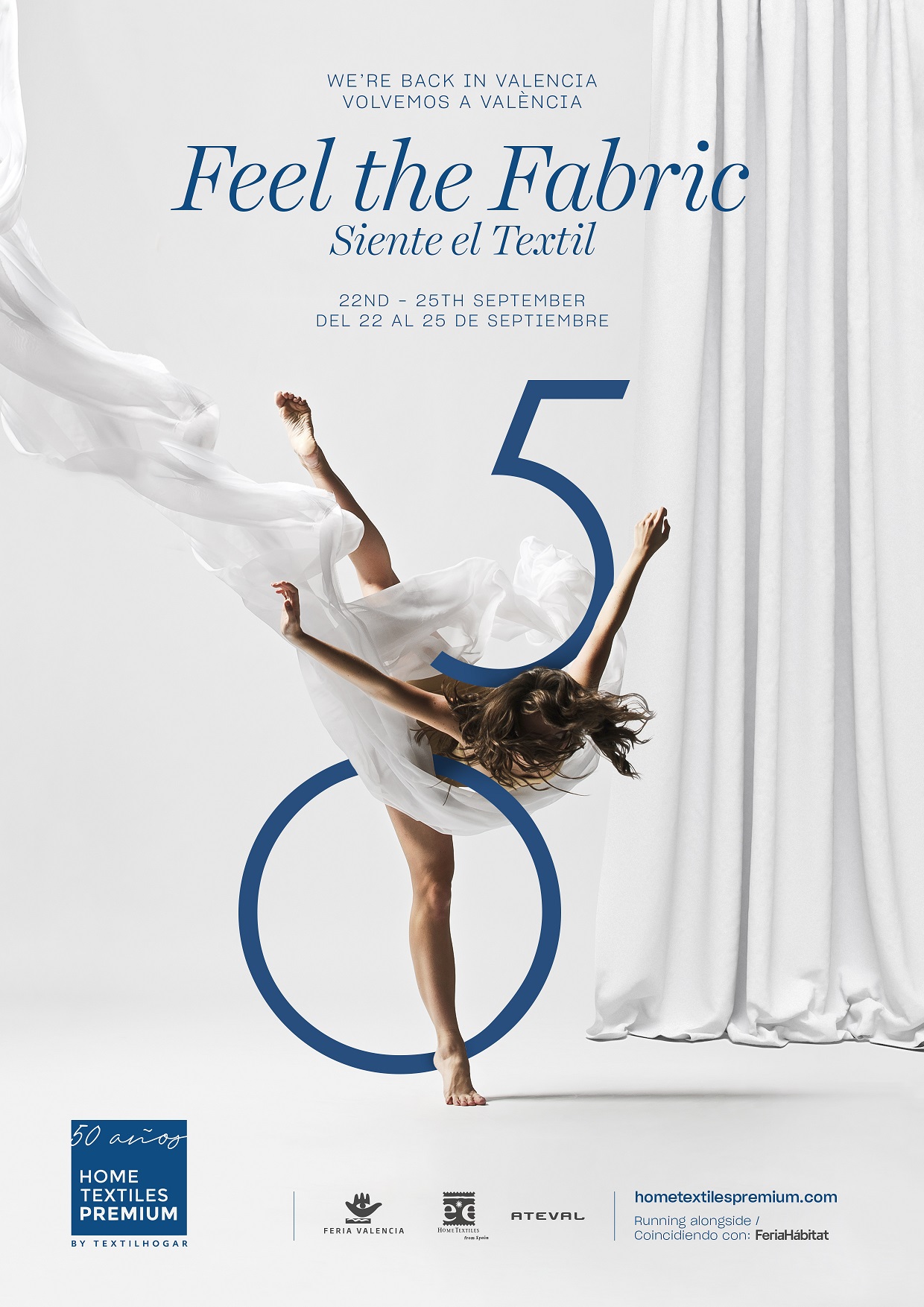 The new ‘Feel the Textile’ slogan for Home Textiles Premium marks the 50 editions of the original Textilhogar trade fair held so far that gave rise to HTP.

The trade is celebrating the event’s return to Valencia this year. Home Textiles Premium by Textilhogar runs from 22nd to 25th September coinciding with Feria Hábitat Valencia.

Valencia, 31th January 2020.- For Home Textiles Premium by Textilhogar, this year will be quite different from any other. 2020 is set to be a very busy year for the only trade fair dedicated 100% to home textiles, upholstery and décor that takes place in Spain. Most notably, it will be returning to Feria Valencia. The industry will also be celebrating the 50th anniversary of the very first Textilhogar.

From 22nd to 25th September, Feria Valencia will be hosting a new Home Textiles Premium by Textilhogar, an edition that will be running at the same time as Feria Hábitat Valencia and marks the textile industry’s return to Valencia after five editions of Home textiles Premium by Textilhogar in Madrid. The fair will continue to benefit from organizational support from textile trade association Ateval – Home Textiles from Spain.

This year also marks a special anniversary for the industry in general: 50 years since the very first edition of the traditional Textilhogar trade fair. A great deal has happened since the first edition of the Textile Fabrications for the Home Trade Fair (Textilhogar) took place on 2nd February 1970 at the legendary Feria Muestrario Internacional de Valencia exhibition centre. The fair started life with the full backing of the industry, which it has in turn driven forward and helped to be increasingly international over this last half century.

Home Textiles Premium by Textilhogar wanted to reflect two aspects of the industry in the new look it has introduced for the 2020 show, which has been developed by Valencia-based design agency Trumbo Agency, whose clients include Bankia, Aston Martin, Consum and the Generalitat Valenciana. The slogan, “Feel the Textile”, refers to the roots and essence of the industry and to its vision of a future marked by innovation.

The aim, according to Trumbo, is to communicate the intrinsic aspects of textiles such as “elegance, energy, delicacy, attention to detail and strength.” The consultants claim that the new imagery attempts to reflect associations between concepts such as “business and companies, production and trends and local and international” and that the result reflects “the inspiration that infuses the textile industry in an iconic image that represents us all.”

The launch of the fair’s new look marks the start of the Home Textiles Premium by Textilhogar promotion and marketing campaign. In fact, a dedicated team from the fair recently took part with Ateval – Home Textiles from Spain in the Frankfurt fair side by side with Spanish exhibitors.

Many of them expressed enthusiasm, conviction and commitment to take part in Home Textiles Premium by Textilhogar 2020, and have already booked their space at next September’s fair. HTP’s sales team has also managed to contact leading international companies interested in taking art in this next showcase for the textile sector in Valencia.