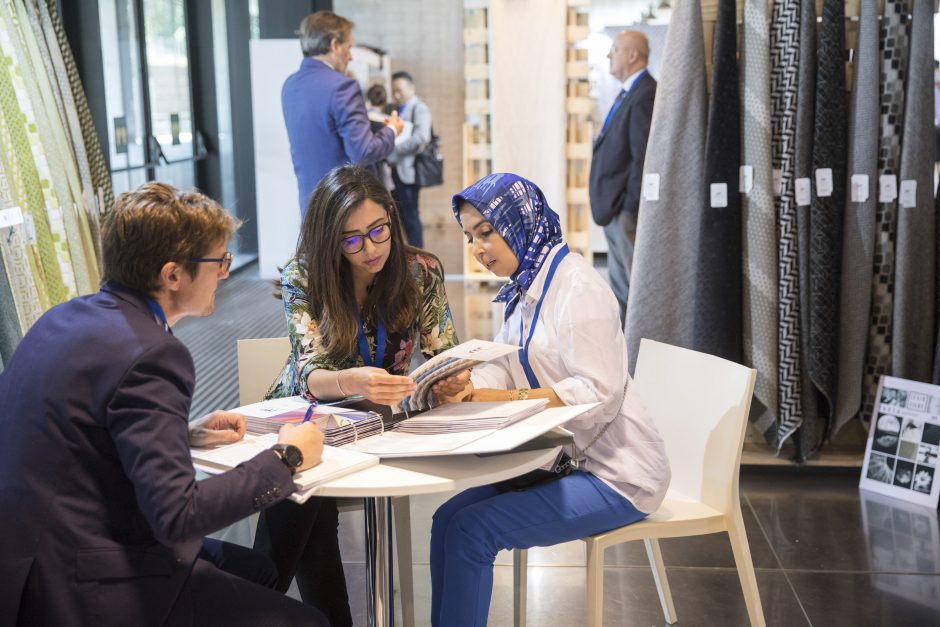 As part of the B2B meetings organised by ATEVAL – HOME TEXTILES FROM SPAIN with support from IVACE Internacional and ICEX.

The fair is putting the final touches to its fifth edition, which takes place from 11th to 13th September at Madrid’s Caja Mágica and will be showcasing around 200 companies and brands.

Valencia, 2nd September 2019.- Home Textiles Premium by Textilhogar is stepping up its commitment to boosting the industry’s international trade. The fair’s fifth edition takes place imminently, from 11th to 13th September, at the Caja Mágica in Madrid and the organisers have confirmed that a significant number of top international buyers and specifiers from as many as 35 different markets across all five continents will be visiting. These are professionals with substantial purchasing power and ability to influence purchase in the contract sector and have been selected as part of the fair’s International Guest Buyer programme, which is co-ordinated by ATEVAL – Home Textiles from Spain and is supported by IVACE Internacional and ICEX.

The aim of the programme is to open international markets to the ‘made in Spain’ offering on show at Home Textiles Premium by Textilhogar and, by doing so, boost exhibitors’ business in those countries that are the industry’s prime target markets. The response from international buyers has been very positive, with professionals from the following countries confirming they will be visiting: Algeria, Argentina, Armenia, Australia, Austria, Azerbaijan, Belgium, Bolivia, Canada, Chile, Colombia, Costa Rica, Croatia, the Czech Republic, the Dominican Republic, Ecuador, Estonia, France, Georgia, Greece, Hungary, Italy, Japan, Kazakhstan, Lebanon, Mexico, Morocco, New Zealand, Nigeria, Poland, Russia, Saudi Arabia, South Africa, the United Arab Emirates and the United Kingdom.

For the companies exhibiting, this is a very attractive delegation of visitors as they include both retailers, upholstered furniture manufacturers and heads of buying at major companies and specifiers (architects, decorators and interior designers) at the main design consultancies with links to the textile trade interested in making contacts in the contract sector.

Representatives of the various international media are also set to visit and see for themselves what has become the main trade fair for home textiles, decorating and upholstery that takes place in Spain. Journalists from Italy, Colombia, Kazakhstan, Lebanon, Mexico, Portugal and Russia have confirmed they will be attending the fair, courtesy of an initiative also co-ordinated by ATEVAL – Home Textiles from Spain.

As Leila Bachetarzi, director of the International Development Department at ATEVAL explains, “currently it is more necessary than ever to boost or companies’ international sales channels” and, in that regard, “initiatives such as this Inbound Mission with B2B meetings scheduled in over the three days of the fair, give industry members the opportunity to access emerging markets and generate new business opportunities.”

Bachetarzi underscores that “consolidation of Home Textiles Premium as the international meeting point for the only European trade fair for Home textiles that takes place in the second half of the. Year, in Spain. It draws an audience of buyers involved in all the different areas of the home textiles business, both the traditional retail channels and global contract project specifying.”

The organisers are making the final preparations now for an edition of the fair that will be featuring around 200 companies and brands represented by 68 exhibitors from Spain and Portugal that will be showing new collections for the upcoming season. This year’s show also includes the ‘El Cubo’ space again. Dedicated to the contract sector, it will be featuring a range of textiles displayed in contract settings by fabric manufacturers and professional interior designers and decorators.

Feria Valencia beats its own forecasts with more than 48.000 trade visitors flocking to Hábitat, Textilhogar and Espacio Cocina SICI